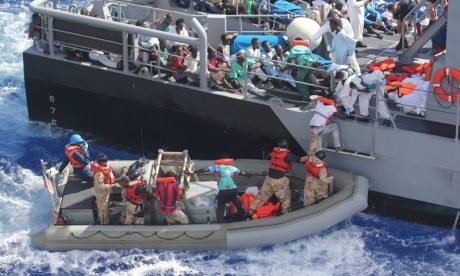 Long before Europe was hit by its worst-ever “refugee crisis” this summer, Libya was already one of the main gateways into Europe for refugees and other migrants. It is more transit than source country – despite two civil wars since 2011, few Libyans made their way to Europe. But tens of thousands of migrants from elsewhere move through the country each year, building solid networks of people smugglers that have infiltrated Libya’s social and political fabric.

The numbers passing through Libya grew rapidly from 2013, passing the 100,000 mark in both 2014 and 2015, and creating the first massive flow of migrants into Europe by sea, with flashpoints spreading north through the continent from Lampedusa to Calais. The central Mediterranean route – where migrants coming from Libya make up the vast majority – is the world’s deadliest. It is the site of almost 3,000 casualties in the first ten months of 2015 out of over 4,000 migrant deaths at sea worldwide.

Though the eastern Mediterranean migrant route, through Turkey and the Balkans, surpassed Libya in the intensity of flows in summer 2015, the numbers from Libya have remained high. It provides a case study that Europe can
use to draw lessons for its approach to migration.