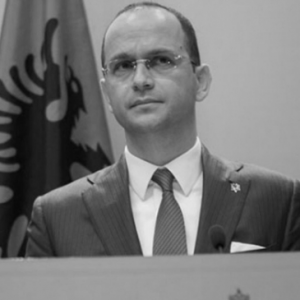 Ditmir Bushati is the Minister of Foreign Affairs of the Republic of Albania since 2013. As an MP, he previously chaired the Parliamentary Committee for European Integration (2011-2013). Ditmir Bushati graduated from the Faculty of Law of the University of Tirana and holds a LL.M from Leiden University in The Netherlands. Prior to his political career he was a civil society leader and a Founding Director of the European Movement in Albania. He then worked at the Albanian Ministry of European Integration as part of the team negotiating the Stabilization and Association Agreement with the European Union (SAA). He has worked as Advisor to the Deputy Prime Minister, the Constitutional Court, the Office of the President of the Republic of Albania and the International Criminal Tribunal for the former Yugoslavia. Ditmir Bushati has published numerous scientific papers on the EU enlargement process, public international law and European law and has lectured at different institutions and universities in Albania and Kosovo.