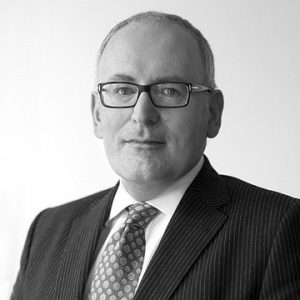 Frans Timmermans has been the First Vice-President of the EU Commission since 2014, in charge of Better Regulation, Inter-Institutional Relations, the Rule of Law and the Charter of Fundamental Rights. From 1993 to 1994, he was Deputy Head of the Minister for Development Cooperation’s EC Affairs Section of the Netherlands. From 1994 to 1995, he served as staff member for EU Commissioner Hans van den Broek. Frans Timmermans served as Senior Advisor and Private Secretary to the High Commissioner on National Minorities of the OSCE, Max van der Stoel, from 1995 to 1998. He served as an MP in the Dutch Parliament representing Partij van de Arbeid (Dutch Labour Party) from 1998 to 2007 and again from 2010 to 2012, when he was appointed Minister of Foreign Affairs. He was Secretary of State for Foreign and European Affairs from 2007 to 2010, and Minister for Foreign Affairs from 2012 to 2014.