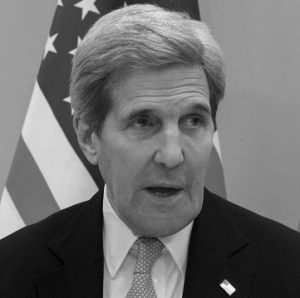 John Kerry was US Secretary of State under President Barack Obama from 2013 to 2016. He graduated from Yale University in 1966 and joined the US Navy during the Vietnam War. He won the Silver Star, the Bronze Star and three Purple Hearts in action in Vietnam, and returned home as a hero who then became an outspoken opponent of the war; he earned national attention for his testimony before the US Senate in 1971. In 1976, John Kerry received a law degree from Boston College Law School and went to work as a top prosecutor in Middlesex County, Massachusetts, where he took on organized crime, fought for victims’ rights, and created programmes for rape counseling. He was elected Lieutenant Governor of Massachusetts in 1982. After two years, in 1984, John Kerry was elected to the US Senate, where he served for 28 years, until 2009, having been re-elected in 1990, 1996, 2002 and 2008. He was also the Democratic candidate for the 2004 presidential elections, which were won by George W. Bush.