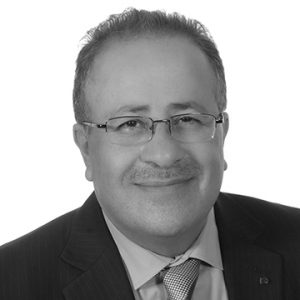 Mohammed al-Hadid has been President of Jordan’s Red Crescent Society since January 1993, and was Chairman of the Standing Commission of the Red Cross and Red Crescent from 2003 until November 2009. He was also awarded an honorary PhD from Ben Gurion University in May 2009, and the title of “Excellency/Minister” by King Abdullah II in December 2003 on his election as Chairman of the Standing Commission of the Red Cross and the Red Crescent by the International Conference in Geneva, and in recognition of services rendered to his country. He has been Hospital General Director since 1992. In July 1997, he became Vice-Chairman of the Jordanian National Committee for International Humanitarian Law. He has been a member of the Higher Council for Civil Defence in Jordan since 1998 and a member of the Council of the International Institute of Humanitarian Law in San Remo (Italy) since 2007. He has been Vice-Chairman of the National Committee for the prevention of AIDS since 2002.